Welcome! Here you can find 1000+ design freebies made by Dribbble users. Have a look around! 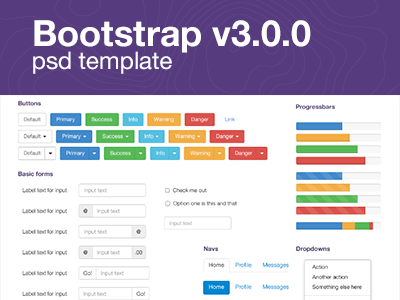 I personally think a PSD kit for Bootstrap misses the point entirely. Just use the Bootstrap itself if you want to create some mockups!

Could be useful for those who don’t know HTML/CSS, though.

Bootstrap V3.0.0 PSD Template is a free UI Kit design resource made by Dribbble user Monsieur Cédric. As far as I can tell, its license is Unknown.

Helpful hint: Dribbble users are nice. If the license is unknown, it is usually because they forgot to mention it explicitly; not because they were being stingy. Ask nicely and they will probably allow you to use it.